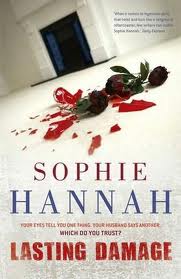 A Room Swept White was gripping but flawed. I really enjoyed it but it’s worth mentioning that my boyfriend thought that it was (in his words) “quite bad” on a few counts. He disliked the characters intensely and, as I did felt that the ending wasn’t as twisty as with her other books. We both have quite high expectations of Hannah’s crime novels after I inducted him by practically forcing him to read the brilliant Little Face

after totally loving it, so that probably doesn’t help. Arguably he’s a bit less forgiving than me! Lasting Damage

though, is Sophie Hannah back on top form.

The blurb on the back told me that the mystery begins when a woman named Connie Bowskill logs on to a property website and looks at a virtual tour of a house in Cambridge. She’s confronted with a bloody mess – a woman, lying down in a pool of blood in the middle of the living room, yet when she goes to get her husband to see it, the tour has gone back to normal and the living room is neat, tidy and bloodless as you would expect.

From the first line, I was hooked:

“I’m going to be killed because of a family called the Gilpatricks.”

This, and the (real or imagined?) murder had my brain firing off questions all over the place, and the best thing was that unlike A Room Swept White, Hannah kept me hanging right until the end. Also, in the previous novel, the ending was a bit forced. Lasting Damage

had a simpler but more surprising twist.

I am getting a little bored of the neuroses of Charlie Zailer and Simon Waterhouse – who, if you haven’t read any of Hannah’s novels are part of an ongoing plotline. I just kind of want to yell – “sort it out!” I do however, like the fact that Hannah is giving other characters on the police more time. A small part of the reason why I think I enjoy Hannah’s books so much is because of their setting and the funny little observations of people’s ‘Englishness’. I do sometimes wonder if this would translate to readers from overseas, but I suppose that you could say the same about American novels or Scandinavian crime fiction.

I would definitely recommend Sophie Hannah’s novels if you fancy a bit of crime fiction and need a change from being glued to CSI, NCIS or any of those other programs with acronyms for names! Start with Little Face

if you haven’t read any before. If you have then I would definitely say that Lasting Damage

is one to look forward to. I stayed up way too late finishing it as Hannah drip fed me clues, and delivered a typically twisted finale. Excellent stuff!

is the fifth book in Sophie Hannah’s crime novel series. 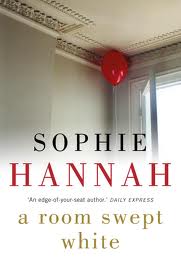 The central story revolves around a group of mothers whose children have died in uncertain circumstances. The mothers were convicted of killing their children and then later acquitted with the cause being put down to cot-death. Fliss Benson is asked to produce a documentary about the cases. She takes over from her boss Lawrence Natrass who is a zealous campaigner against what he believes are women who are victims of a miscarriage of justice. One day at work, Fliss receives an anonymous envelope. Inside it is a card with sixteen numbers laid out in four by four rows. She dismisses it as a prank until she later finds out that one of the mothers, Helen Yardley is found dead in her home. A card has been left on the body, just like the one Fliss received.

is addictive. Like the other books, the story is told from the point of view of a female narrator – in this case Fliss – and through a series of interviews, articles and transcripts, as well as a more typical third-person retelling of the police investigation. I like this style because the story moves along at a fast pace and getting into the narrators head makes me feel more involved in the plot. Fliss is a bit neurotic which was a little irritating at times but also entertaining.

I thought that the cot death storyline risky but ultimately well implemented. Hannah uses the ambiguity surrounding the cases to full effect, causing the reader to constantly question whether the women were innocent victims of a miscarriage of justice or in some way culpable. A potentially sensitive subject, I think that Hannah quite cleverly explores the complexities in judging SIDS (Sudden Infant Death Syndrome) cases. She looks at how difficult it is for a jury with facts in a situation where medical opinion is not always conclusive and firm evidence is not available.

As usual, I loved the pithy writing style and it felt welcome to go back to characters that I was familiar with – Detective Simon Waterhouse, Sergeant Zailer and the rest. In A Room Swept White

there was less focus on the relationship between Zailer and Waterhouse, which was ok because there was so much going on, but I miss this in the context of the series. I felt that the whole team was more involved in this book which I liked because it meant that I got to know more of the characters on the force.

There were a couple of little frustrations for me. The plot line involving the Chief Police Officer nicknamed “The Snowman” felt unfinished and the reveal wasn’t as much of a twist as in some of the other books in the series and felt over-complicated. However these are really small complaints about what was overall a cracking page-turner. I spent most of Sunday afternoon curled up and whizzed through the whole second half of the book (250 pages!). I’m just glad that I got myself a copy of Lasting Damage

to read next, so I don’t have to go cold turkey…

My other Sophie Hannah reviews can be found here.

If you have read Sophie Hannah, are there other authors who have a similar style that you would recommend?

Sophie Hannah’s The Other Half Lives 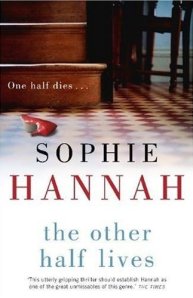 The Other Half Lives

is Sophie Hannah’s fourth psychological thriller featuring DS Charlie Zailer & DC Simon Waterhouse. I’ve read every book in this series since the first one came out and have eagerly awaited each new arrival so when I spotted The Other Half Lives

in Tesco at a bargain price I had to snap it up. Here’s the blurb:

Ruth Bussey knows what it means to be in the wrong and to be wronged. She once did something she regrets, and her punishment nearly destroyed her. Now Ruth is rebuilding her life, and has found a love she doesn’t believe she deserves: Aidan Seed. Aidan is also troubled by a past he can’t bear to talk about, until one day he decides he must confide in Ruth. He tells her that years ago he killed someone: a woman called Mary Trelease.

Ruth is confused. She’s certain she’s heard the name Mary Trelease before, and when she realises why it sounds familiar, her fear and confusion deepen – because the Mary Trelease that Ruth knows is very much alive…

For anyone who hasn’t read any Sophie Hannah thrillers, her hallmarks are dark plots and surprising twists. I have never once managed to figure out what was going to happen in either Little Face

, The Point of Rescue

. What I like about this series is that despite revealing the darkest sides of human nature they are all set in the delightfully mundane setting of a small English town which makes them feel just a little bit too close to home!

Having read all four books I would say that along with the first one Little Face, this would be my other favourite. It’s quite chunky (over 500 pages) by comparison to the rest but it’s a real page-turner so doesn’t feel lengthy. The plot was original and a bit of a departure from some of the others – quite complex really, it had me wondering where on earth she gets her ideas from! Just like with the other books this is split between a third person narrative and also a sort of internal monologue of the main (very confused) female character in the novel which gives you a unique perspective on events as they unfold. I’m not going to go into any more detail because I don’t want to give anything away.

If I have one criticism it’s that I don’t find the police characters particularly likeable and I think if you were start reading a book in the wrong order you might be a little confused as there is an ongoing storyline. However I don’t think it detracts from the main story at all – it certainly doesn’t stop me. Each book can definitely be read on its own but I would advise anyone who wants to read Hannah to start by reading Little Face

which is just brilliant.

The Other Half Lives

is going cheap here on Amazon

right now or maybe you can track one down in your local Tesco’s too! If you fancy reading more reviews of Sophie Hannah I did one for Hurting Distance.

I’ve just realised that it sounds like I’m being paid to rave on about these novels, but I promise I’m  not! I just stumbled on her after reading The Fantastic Book of Everybody’s Secrets (a collection of short stories) and was hooked since then as they are well written and make a nice change to the classic American cop thriller.

Has anyone else read any books by Sophie Hannah (thrillers, short stories, poetry)? What did you think? Who are your favourite suspense / thriller writers?

Tagged Reviews, Sophie Hannah, The Other Half Lives

Sophie Hannah’s psychological thrillers (published by Hodder & Stoughton) featuring Simon Waterhouse and Charlie Zailer are far and away my favourite novels in this genre at the moment. I actually got interested in this author after reading her book of short stories
, which appealed to my own very nosy nature and then her first thriller, Little Face

(2006) got me hooked, from the minute I read the blurb on the back. Then I couldn’t wait to read The Point of Rescue

The storyline in Hurting Distance

centres around Naomi Jenkins, a self employed sundial maker. Just as with the other books it is set around the fictional and utterly English-sounding towns of Rawndesley and Spilling. Naomi has a dark secret from her past, a terrifying ordeal that has affected her ever since. An (unsurprisingly) brittle character who doesn’t shirk at confrontation she becomes involved with the police after her lover Robert goes missing. Although Robert has vanished, his wife insists that he is not missing and in desperation Naomi decides to convince the police that he is dangerous so that they will have to look for him.

This book also picks up the thread of the complicated relationship between Sergeant Zailer and Detective Waterhouse. Both characters are at times likeable and annoying (which makes them very human) and add an interesting link between the novels.

The plot of this book is particularly dark and Hannah’s technique of writing from inside the protagonists head in some chapters is a great way of getting the reader involved and also in exploring the psychology of the character. I was totally gripped as the plot unravelled, and liked the fact that you can plausibly make guesses as to the culprit is in this but you are on tenterhooks to find out the full story.

in hardback, although I’ll be waiting for the paperback.

Also, having just looked at Sophie Hannah’s website, I was delighted to read that her crime novels are being adapted for television at the moment. So I will be looking forward to those with anticipation!