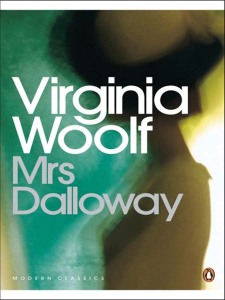 Mrs Dalloway is one of the most interesting books I’ve read in a while but also one of the most difficult. I decided to give it a go as part of Nonsuch Book’s Woolf in Winter season and thought that at just over 160 pages it would be a quick read. It really wasn’t – partly because I was sort of reading in tandem with another book, and more so, because I found it hard not to let my mind drift of when I was reading  as I found Woolf’s prose challenging.
Mrs Dalloway is set on one day in the life of Clarissa Dalloway, the wife of an MP. She is hosting a party and the day begins new and bright:

“And then, thought Clarissa Dalloway, what a morning – fresh as if issued to children on a beach.”

As the day goes on and Clarissa prepares for her party, we dip into the lives of a set of characters. There is Clarissa’s old friend, Sally Seton and an old flame, Peter Walsh. They share a mutual history and missed opportunities. Peter seems a haunted character, a bit of an adventurer who has lived in India, has a soft spot for unfortunate relationships and fiddles with his pocket knife when nervous unlike the unruffled (perhaps uninteresting, but kind) Richard Dalloway.
We also happen upon Lucrezia Warren Smith and her not-always lucid husband Septimus in the park, a curious couple, sometimes heartbreakingly tragic, but also strangely tender and together. Then there is Clarissa’s daughter Elizabeth, a young woman who is stepping out into the world brightly, full of hope and potential in contrast to others strife and fading youth.
It took me a while to get to grips with the different sets of characters, especially as the writing often jumps from one situation to another without notice. They are however, very realistic and Woolf’s depiction of their lives is wonderfully poignant. I also found Woolf’s writing style at once vibrant and at other times just too flighty. Sometimes it was difficult for me to focus and catch the thread of what was going on. I did appreciate the wonderful way that the city life of London was evoked however, and how some descriptions were so vivid they were almost ultra-real, like this passage which turns a simple moment into something more:

“Gently the yellow curtain with all the birds of Paradise blew out and it seemed as if there were a flight of wings into the room, right out, then sucked back (for the window was open).”

I had a real sense of how people’s lives were changed by the war and by their experiences overseas and how society was changing. There is a passage where one of the male characters comments on how young women are now happy to paint their faces in public, and another where someone at the party comments on how young girls wear dresses  well above the ankles now (gasp!).  I was really struck by how modern Woolf’s writing seemed, there is a scene in which the carts and carriages divert to let an ambulance through the streets and it might have been a scene picked out of the everyday in London now.
I am happy that I’ve read Mrs Dalloway. Having read Orlando a few months ago, I didn’t expect it to be a walk in the park, but it was harder to digest than I thought it would be. However, it did give me lots of food for thought and although I don’t think that I would ever go on a Woolf binge, I would like to read more in the future. Perhaps just not for a little while!

Are you a fan of Woolf?

Details of Woolf in Winter can be found here.

Posted in Reviews by Author, Short and sweet, Virginia Woolf