The Boy in the Striped Pyjamas, by John Boyne 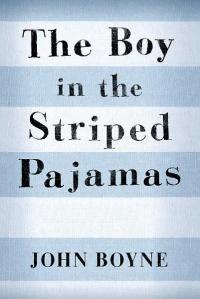 Carrying my current read (The Passage – a breezeblock of a book!) on the tube to work last week wasn’t a very appealing prospect, so I picked The Boy in the Striped Pyjamas

by John Boyne for the commute.

I’m so glad that I did. Having read several glowing reviews I was a bit wary that it would disappoint. In fact it was the perfect book for me to dip into when I had a spare moment because the style and tone is deceptively light given the story’s serious subject matter.

I don’t want to go into too much detail on the plot as the true circumstances of the story are intentionally revealed bit by bit as the book progresses and I wouldn’t want to spoil that experience for others. In brief, the book’s main protagonist is Bruno, a boy of nine whose life is uprooted when he is moved from his home in the city to an isolated place because of his father’s job.

The reader’s perspective is through Bruno’s eyes as he explores his new home and seeks to understand the behavior of the people around him. In the couple of chapters I admit that I felt that the childlike voice was a little contrived, and Bruno himself was a spoiled and irritating! However as  the character is developed I found Bruno became more and more believable and likeable. More cruicially it is his childish innocence which slowly but surely reveals the unpleasant context of the new situation. Boyne uses Bruno’s young voice to pose astute questions about the illogicality of the behaviour of the adults around him.

This is the kind of crossover book that makes me want to read more in this genre. Boyne’s clever narrative makes the serious message in The Boy in the Striped Pyjamas

accessible and yet all the more poignant for being so gentle. I truly think that this is a book that a person of any age could pick up, enjoy and be moved by.

Have you read The Boy in the Striped Pyjamas?