Midnight in the Garden of Good and Evil, by John Berendt 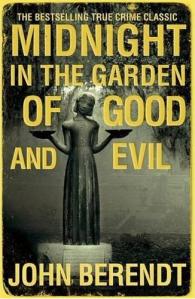 is a non-fiction book by John Berendt, based on real events that occurred in the 1980’s. I actually saw the 1997 film adaptation (directed by Clint Eastwood) when it came out but although I remember thinking it was very good at the time, conveniently forgot most of the detail which was great because it meant that I came to the book almost as if it was a totally new story!

The book is narrated by Berendt himself. A New York magazine writer and editor, he visits Savannah by chance one weekend as a result of bargain air flights and falls in love with the place. He goes back three years and pretty much adopts Savannah as his home. The main plot of Midnight in the Garden of Good and Evil

is wrapped around a murder, of a young and reckless male prostitute named Danny Hansford described as “A Walking Streak of Sex”, however the shooting doesn’t actually take place until the middle of the book. The narrative leading up to that is all about Savannah and its eccentric inhabitants. In the aftermath of the shooting the book charts the progress of the murder trial..

is a fascinating and involving book. Although it is based on fact, it has been compared to Capote’s In Cold Blood in the way that it is a sort of ‘non-fiction novel’. If anything the characters are more crazy than you often find in a fiction book! To give you a flavour of the personalities;

“I dance, I do lip synch, and I emcee,” she said. “Shit like that. My mama got the name Chablis of a wine bottle.”

“She had a wardrobe that consisted mostly of shortie nightgowns and peignoirs. They revealed her still-shapely legs and discreetly swathed her upper half in clouds of feathers and silk chiffon. She dyed her hair flaming red and painted her fingernails and toenils dark green. She bullied and wheedled; she railed and purred. She drawled and cussed and carried on. For emphasis, she threw objects accross the room – pillows, drinks, even Lulu the poodle.”

I was also very much taken with Emma Kelly “The Lady of Six Thousand Songs”. I could go on but I would prefer to leave it to readers to discover this myriad of characters themselves.

Apparantly after the book came out, lots of tourists wanted to visit Savannah. However even thought I was totally fascinated by what Berendt described I wouldn’t say I would want to go live in Savannah. While it seemed like beautiful and bizarre place there were very dark themes – underlying racial tension and a city that furiously protected itself from change at the cost of progress.

It was only really the third quarter of the book where I felt a bit of a lull in the writing. I found at times I wanted to completely focus on what was happening with the trial and Berendt kept flipping to talking about different characters. However I loved the ending of the book which I found really satisfying.

is wonderfully written book with glorious and funny characterisation and descriptions which make you feel as if you are totally imbued in the atmosphere of Savannah. Berendt’s passion for it as a place, is reflected in every sentence. Don’t go expecting a classic ‘murder myster and a page turning murder trial all mixed up with a bit of voodoo. Although they are very different in substance I would say that if you like In Cold Blood then you’ll love Midnight in the Garden of Good and Evil

Have you read any ‘non-fiction novels’ that you enjoyed?