Beware. The book pictured below is a Pandora’s box of tall tales and weird creatures… 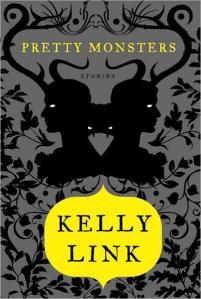 Since I read Pretty Monsters over two weeks ago I’ve been taking a little while to consider how I feel about it. Link’s collection of short stories contains ten different tales, each of which are totally original. The reader is invited to suspend disbelief and is drawn into a world where magical characters and objects are part of everyday life. The first story introduces us to a young boy who digs up what he thinks is the grave of his dead girlfriend in order to retrieve his poems – only to wish he hadn’t. Then there is the story of two twins who live in a creepy old house and whose babysitter has a strange magic hat. In another tale a two young children are sold to wizards who never seem to come out of the lofty towers in which they live.

My reaction to each of the stories varied greatly, which is probably not surprising given how different they all are to each other. If anything, the only common thread between them is that they are all, well…strange. Some stories, I loved such as The Faery Handbag, (how could I not love a Scrabble playing grandmother with a magical handbag?), but others I couldn’t to get to grips with. I think I would have enjoyed this book more had I read the stories separately rather than in succession. At times, the mental effort of jumping into a totally new world which, in some cases were very obscure left me feeling a little exasperated. There was one story about aliens that I gave up on in a matter of moments.

is a fascinating read. I think most likely I would have loved this when I was younger and had a better imaginative faculty, as well as more time on my hands to ponder the more befuddling stories. I remember being fascinated when I read Angela Carter’s Bloody Chamber or The Virago Book of Fairy Tales which tick the ‘quirky’ box in a similar way. Link’s writing and the scope of her vision is something special and she conjures up weird, beautiful characters. So while I wasn’t quite in the mood for such a mental work-out (shame on me), I would like to revisit her of the stories individually in the future. Perhaps on a cold winter’s night…

What books have you read that tested your imagination?