Unfortunately the first thing I noticed about the choice for Riverside Readers this month was the range of hideous covers available. Even though my copy was published in 1982, I don’t think that’s 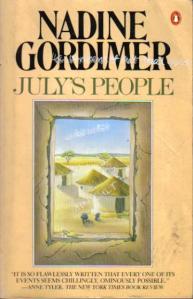 an excuse for the bizarre peach and brown theme. Being a product of that year myself I don’t think everything made in the 80’s has to be in bad taste, but you may disagree, hmmm?

Savidge Reads‘ cover (happily it was on loan from the Library) was even stranger. At first it looked like a black and white image of the surface of the moon but on closer inspection it was an image of huts. Kimbofo‘s cover was also dubious although I gave it brownie-points for being a retro penguin classic-style cover. Whoops! I seem to have been completely diverted from the task in hand – writing about the contents of the book itself, so back on topic…

The plot of Nadine Gordimer’s novel July’s People, revolves around the Smales, a liberal white family  living in South Africa who in the wake of civil unrest in Johannesburg flee the city. Their servant July takes them under his wing and into his native village. Gordimer puts the Smales’ relationships, both within the  family and with the people in the village under the microscope, highlighting the effect of race on individuals perceptions of each other and the security of their situation.

The July’s People book group was the perfect example of how reading and discussing a book with others can actually change your feelings of a novel. To put it bluntly I found Gordimer’s writing style and the story itself hard-going right from the start. The sentence structure is quite unusual and jumps around in parts, so that you are quite confused as to what is actually going on at any one point in time, however in hindsight, I think that this is what Gordimer intended. The Smales are bewildered by their new environment and the conversations that they have whether with July or between each other seem to be at cross-purposes. What the author does, and effectively so is to drop the reader into the world of the Smales so that you can smell and hear everything and understand how precious the smallest items are.

“- And soap? – She was cherishing a big cake of toilet soap, carefully drying it after each use… Soap he had remembered to take from her store-cupboard? His clean clothes smelled of Lifebuoy she bought for them – the servants. He didn’t say; perhaps merely not to boasts his foresight. She was going to ask- and quite saw that she could not.”

Maureen, the mother in the Smales family is the character that we felt in the group that really stood out as going on a personal journey in the novel. She watches her children adapt and make friends in the community so easily, whereas she is never accepted by the other women. She is constantly interpreting and re-interpreting thoughts and language in her interactions between July, her former servant, and Bam her husband.  While Bam struggles to make himself useful by building a well and asert his manhood by shooting wild pig, it is Maureen whose head we get into most and her vulnerability and frustration that we feel. Her sense of loss is highlighted when she realises that she does not want to read the paperback that she has brought with her:

“But the transport of a novel, the false awareness of being within another time, place and life that was the pleasure of reading for her, was not possible. She was in another time, place, consciousness; it pressed in upon her and filled her as someone’s breath fills a balloon’s shape. She was already not what she was. No fiction could compete with what she was finding she did not know, could not have imagined or discovered through imagination.

The key theme of the novel hangs around perception and mis-understanding of people’s behaviour and their motives . Maureen as July’s former employer has always thought she and her husband were open-minded but as the book continues we see her liberalism put to the test. She always trusted July as a servant, confident that he was always honest with money and their belongings and initially feels grateful to him for rescuing them. However while at July’s house, she discovers objects that used to belong to the Smales. While these are of low value – for example a pair of scissors), an underlying suspicion begins to creep through and she begins to question July’s motives. Is Maureen right to worry about July’s reasons for bringing the family there or is she just being paranoid? Is she as liberal as she thinks or were her values just a facade? As a reader we are brought on the journey really experiencing the situation and relationships.

So in hindsight, July’s People is an acomplished and thought-provoking piece of writing. I didn’t really enjoy reading it, but I think that was because I had a pre-conception of what the novel would be about. I was expecting some kind of big event to happen and felt as if I was waiting. I was also bemused because when I started reading I didn’t realise that the events in the book were actually imagined, not real – Gordimer’s idea of what could happen in South Africa. I couldn’t quite sympathise with the Smales because however detached from their previous life I couldn’t help but think how much worse it could be for them. I found myself frustrated, but I think that this is the mindset that Gordimer aims to put the reader in. After talking about the book in a group, I feel as if I could read this book again, and appreciate it in a different way.

I would recommend July’s People, but with a warning to approach it with an open mind and to be prepared to sit back and let it sink in.

I’d be really interested to hear from anyone who’s read other Nadine Gordimer books. Have you read July’s People or other books by this author?

Posted in Books at Length, Nadine Gordimer, Reviews by Author, Short and sweet