The Red House Mystery by A.A.Milne 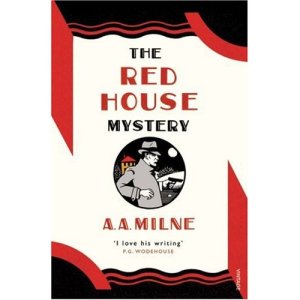 I discovered the existence of this novel by accident while reading up on Winnie the Pooh (as you do) and decided I had to have a copy. So I got my mitts on a bargain from eBay and revelled in reading a real old-fashioned murder mystery on my daily commute.

The first thing that struck me as I opened my battered copy, was the lovely dedication to Milne’s father at the start of the book:

Like all really nice people, you have a weakness for detective stories, and feel that there are not enough of them. So after all that you have done for me, the least I can do for you is to write one. Here it is: with more gratitude and affection than I can well put down here.

It reminded me of something I read about John Buchan’s Thirty-Nine Steps, where he said that there weren’t enough of a certain kind of adventure stories so he wrote one! And then I felt sad, as in my copy, a re-print it had a further note alluding to the fact that Milne’s father died before he was able to read it. It seems as if Milne enjoyed writing for people very much which makes me feel that his stories are quite special.

The story itself is a typical mystery with an English country house setting. The Red House, belongs to Mark Ablett, and it is the scene for the dramatic murder of his brother Robert, who is something of a black sheep and has just arrived from Australia to visit Mark. Robert is found dead in a locked room on the day that Tony Gillingham decides to visit his friend Bill who also lives at the house. Tony and Bill decide to investigate.

. Tony and Bill make the perfect Holmes-Watson partnership unravelling the many clues, and it was great to just read something a bit fun. I enjoyed Milne’s writing and found that I could see echos of Pooh Bear about Bill. At times Tony is a little arch in his manner but that’s part of what makes the dialogue between the two characters so entertaining. Tony, an amateur detective with a photographic memory ponders;

“Of course it’s very hampering being a detective, when you don’t know anything about detecting, and when nobody knows that you’re doing detecting, and you can’t have people up to cross-examine them, and you neither have the energy or the means to make proper inquiries; and in short, when you’re doing the whole thing in a thoroughly amateur, haphazard way.”

It’s an entertaining journey trying to figure out has happened, and it’s possible to guess at least half of the situation from the clues while being kept in the dark enough to be surprised. What really makes it a joy to read though is Milne’s unique voice.

is the perfect book to snuggle up with on a cold night with a cup of mulled wine or hot tea.

Oh and you can read most of it for free on Google reader (although I think there are some missed pages), or get a taster to see if you want to buy a copy.

Have you read anything else by A.A.Milne?

Posted in A.A.Milne, Books at Length, Reviews by Author, Short and sweet