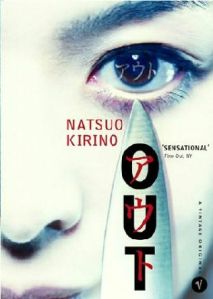 Out, by Japanese author Natsuo Kirino is a difficult novel to categorise. If I had to put it into a category I would say it was a sort of psychological thriller, but it is not your average page-turner.

Having read Grotesque by the same author a few years ago and after hearing that Out was supposed to be one of Kirino’s best novels I had it in the back of my mind to pick up a copy and although having kept an eye out for some while for one in a charity shop, I finally gave in and bought it new on sale from Amazon. I thought it was about time to get into a good thriller, but I didn’t realise quite how gritty Out would be.

The story revolves around four women who work the gruelling night-shift at a boxed-lunch factory. All of them live dysfunctional lives. One night, one of the women, a young and beautiful mother is finally at the end of her tether. She murders her husband after he comes back from a night of gambling and chasing women. She confesses her crime to one of the friends Masako, who decides to help her get rid of the body by enlisting the help of her other co-workers. When parts of the body are discovered, the police get involved however the women face far more dangerous enemies in the form of a ruthless nightclub owner and a loan shark.

Having read Grotesque, I had an idea of what I was in for with Out. Kirino’s writing is stark. She takes no prisoners in describing the motives of each of the characters and highlighting their flaws. The relationships in the group of women are intriguing. Are they drawn together because of circumstance or something darker?

“She wondered a bit uneasily whether she’d be convincing in the role of the worried wife. After all, she still felt a tingle of excitement when she recalled the sight of his lifeless body slumped in the doorway. Serves the bastard right.”

On the bare facts alone it’s easy to understand why Yayoi, in the role of the wronged wife would murder her husband in the heat of the moment, but Kirino doesn’t depict her as a victim. Somehow I didn’t feel sorry for her, or for any of her friends.

Masako, the woman who orchestrates the body’s disposal is a brilliant creation. She is businesslike and complex – in fact just plain scary. Kuniko is depicted as pig of a woman, intent on acquiring possessions out of her reach and ready to do whatever it takes to get the money. Yoshi or ‘Skipper’ as she is nick named is the only character I warmed to at all, somehow preserving a sort of innocence despite her frank approach to the situation in hand.

As Satake (the nightclub owner) gets involved, events turn very ugly and I read on with a mixture of fascination and horror.  Kirino gives the reader a glimpse into the harsh thoughts of every character in the book and detailing the intricacies of every situation as the book progresses, making it a pretty hard read at times.

I wouldn’t say that this novel is for everyone because the content is pretty sick at times, but if that doesn’t bother you then Out is a fascinating and gripping read as well as being skilfully written. I honestly think that the most disturbing thing about Out is not the actual violence in it, but the brutal way that she lays out the nastiest thoughts and exposes the worst of human nature.  Some of the comments on the book jacket suggest that Kirino is hinting at a kind of twisted feminist motive behind the women’s actions, but I feel that’s simply a simplistic and misplaced category for what is really a unique exploration of the dark complexity of women’s relationships.

A shocking, compelling and extraordinary piece of writing.