Death in Venice by Thomas Mann

I thought I would get started a little early on my Venice List, and it seemed only natural to start with the classic German novella Death in Venice by Thomas Mann. I was delighted to find a copy in the library, (this version): 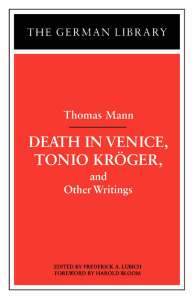 Death in Venice was a book I’d heard of but had no concept of what the story was about until I looked it up for my list. After reading a synopsis, I was surprised at how shocking the premise is. First published in 1912 as Der Tod in Venedig (published as an English translation 1925), and compared to Vladimir Nabokov’s Lolita, the novella follows Gustav von Aschenbach – a famous author in his early fifties – on a trip to Venice. He is struck by a Polish family who are staying at his hotel. At first he notices the puritanically dressed daughters who’s scraped back hair makes them look like nuns and then their brother, a stunningly beautiful boy of 14 who he later discovers is called Tadzio. Aschenbach begins to follow Tadzio him at a distance, compelled by a strange fascination for this boy who he believes has god-like beauty. He stays in Venice to be close to Tadzio despite an uncomfortable feeling that something dangerous is lurking in the cities waters.

Considering that Death in Venice is little more than 60 pages in length, I felt when I’d read it almost as if I’d read a novel. It fits a lot of detail in and everything is described vividly, from Aschenbach’s decision to travel, the strange characters he passes by and of course in glorious colour, the boy whom he is fascinated with. At first I felt that the detail was a bit much for me, until I had read into the story a while, but later I found myself flicking back to re-read the descriptions of the main character to acquaint myself with his face and features which are described in minutae. I found the second half of the story more compelling than the first, but the initial build up is important to understand the journey (not just in simple travel-terms) that Aschenbach is taking.

I enjoyed Aschenbach’s observations about the characters around him. For example there is an old man who he notices at the beginning of his journey and is appalled by because he dresses flamboyantly and rouges his cheeks to give the appearance of youth. Later in the book I recalled this figure when Aschenbach himself visits the hotel’s barber shop and is ‘beautified’ by the assistant there. I was impressed Mann’s writing, the way that he neatly brought this comparison in, and the subtle yet unforgiving way which he lays Aschenbach’s soul bare.

As I mentioned before, I found the latter half of the novella the most compelling. Mann successfully builds up a sense of danger and I was just waiting for something bad to happen – would it be a fall from grace? A violent moment? A slow decline? I was curious to find out. The descriptions of Venice are also wonderful – especially at the beginning where Aschenbach concludes that arriving by any other way than by sea is a like going in at the back door as he sees the city appear before him.

I wouldn’t say that this story would suit everyone. It is very descriptive and a little slow from the beginning. I would describe it as a sort of ponderous story, meandering through the thoughts of an man who is gripped by an uncomfortable ‘Lolita-like’ fascination. I am very glad that I read it and became quite absorbed despite my initial feeling that it was going to be a bit turgid.

Have you read Death in Venice? Did you / do you think you would enjoy reading it?

Posted in Books at Length, Reviews by Author, Short and sweet, Thomas Mann