My Soviet Kitchen, by Amy Spurling 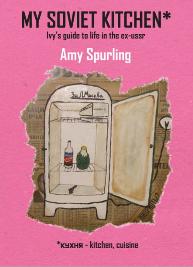 When independent publisher Roastbooks kindly offered me a copy of My Soviet Kitchen, by Amy Spurling for review I said I’d love to receive one but it might be a little while before would get around to reading it. As it happened I ended up picking it up alot sooner, fancying something lighthearted in between chunkier reads. I also have to admit that I was swayed by the size of the volume (a mere 156 pages) and it’s pinkness. Yes I’m afraid it’s true!

The blurb: It’s 1994 and English Ph.D student, Ivy Stone, wakes up in a Moscow flat with a hangover and a vague sense of unease… Unable to remember what she did last night or why there is a cryptic Post-It note on her fridge, she begins an emotional, alcohol-fuelled journey via an Uzbek wedding, an Estonian sauna, and a Georgian serenade.

So far, so intriguing. It sounded like a sort of crazed mystery to me, although it actually turned out to be slightly different from what I expected. I thought it would be more linear, and about finding clues to what had happened. Although there is an element of that, the mystery and ending are really just ‘book-ends’ between which the story of Ivy’s experiences in Russia are told. Billed as ‘Neo-Chick Lit’ I would almost say it’s Neo-Travel-Chick Lit if that makes any sense?! I had the sense that Ivy was Amy Spurling’s alter ego, and that I was more or less reading the product of several months of diary entries, tweaked and then adapted into a book.

is an enjoyable novel. The character of Ivy is whimsical, scatty and fun. I was entertained by Spurling’s descriptions of a variety of objects (such as the industrial fridge made to last a lifetime), the food (the purpose of which seemed to be mainly to line the stomach before drinking copious amounts of vodka) and Soviet habits as seen through Ivy’s perspective. This prompted a bit of nostalgia in me. When I was a teenager I studied Russian for GCSE and visited Moscow on an exchange trip. Come to think of it, that was probably around 1994! The descriptions are amusing athough there were times when I felt some of the details were very slightly laboured. Spurling conveyed moments of craziness, solidarity and friendship as well as pathos (such as when a sick person dies in the Metro station because it’s not people’s assigned duty to deal with the situation) with feeling and genuine warmth. There was also one passage which involved a mix-up with names that had me laughing out loud.

There were some downsides for me. In the book, Ivy is a PHD student, and although I suppose it is part of her character to footnote everything, after the while I felt that it became a little frustrating to have everything explained in a summary. It was a bit too much like reading someone’s thesis. Also, the story did switch around quite a bit. One minute I was in Ivy’s kitchen and the next she was off in rural Uzbekistan which in principle should be exciting but wasn’t linked clearly enough and at times it was a little bit confusing! I saw the ending coming a mile off, but this didn’t spoil the book for me and I thought that it was wrapped up well and left me feeling happy. The book comes with a companion guide which was a lovely idea, though I think it would be simpler to have as an appendix at the back of the novel. It’s defintely an interesting debut, and although I thought it was a little rough around the edges, Spurling’s warm and humorous writing style should stand her in stead for future projects.

To sum up, I would say that, My Soviet Kitchen

is an enjoyable, lighthearted read combining a dash of Bridget Jones with a good glug of vodka.

I want to go back and visit Moscow now…!

Posted in Amy Spurling, Books at Length, Reviews by Author, Short and sweet