The Dud Avocado, by Elaine Dundy

I randomly picked up

, by Elaine Dundy a few months ago because, although I’d never heard of the Author I liked the cover (a typical situation for me!). It’s very shallow behaviour but I find this often leads me to discover new books, so it’s not all bad. The copy that I found was an old orange Penguin Classic edition, although I have to say I kind of love this newer version too; 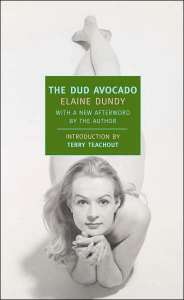 The Dud Avocado follows the adventures of Sally Jay Gorce, a young American girl and aspiring actress let loose on Paris. I would describe her a bit as a Holly Golightly type. Witty, smart and attractive but a bit all over the place! I think it is meant to be loosely based on the author herself and she’s the kind of character you’ll either love or hate – I personally loved her, even though I maybe wouldn’t choose her as a friend, if that makes sense!?

The story is told in the first-person so the reader plays Sally Jay’s confidante as she throws herself into 50’s Paris society and nightlife. We are party to Sally Jay’s experiences as a not-so-naive  party-girl, who falls into a string of relationships which she sees as an opportunity to expand her world view.

“I went back to Montparnasse and flung myself into a celebration which lasted two nights and from which it took me three days to recover.”

This novel must have been quite shocking at the time as she has sexual experiences with various characters, but the beauty is that it isn’t graphic, it is just frank and forthright. Her frankness was actually the most shocking thing to me, as she is totally honest about her emotions, even when they are quite cold or almost heartless. I admired this in Dundy’s writing and felt it was a brave way to write.

I couldn’t help but think of Voice Over and The Bell Jar when I was reading this, probably because of the distinct young female voice and the sense that she is quite lost at times, but in contrast to these novels, The Dud Avocado

is more light-hearted, entertaining and a vivid picture of 1950’s Paris. There are many lines that made me giggle including her dramatic declaration about her hatred for champagne:

“I hate champagne more than anything in the world next to Seven-Up.”

I have to admit to getting a bit lost in the middle as sometimes the switch between the situations she is in is confusing (just as I’m sure Sally Jay is confused!) and it’s a bit difficult to remember who everyone is that she meets, but overall it’s a quick and mainly lighthearted read with some dark undertones.

This is a story that could so easily have been simple ‘chick-lit’, but the quality of the writing (I picked a nice teaser here) as well as the refreshing originality of the character makes it an enjoyable and off-beat bit of literature.