, set in the 1930s, is the story of New York good time girl Gloria Wandrous who was inspired by real-life flapper-girl Starr Faithful. Don’t Google her if you plan to read the book! The story was also turned in to a film starring the late Elizabeth Taylor which is apparently only superficially based on the book but has already been added on my to-watch list.

This is a novel that is definitely helped by discussion as I found out at my latest Riverside Readers group meeting. I can imagine it being an excellent book for a literature course, because there is so much depth to it. The strongest themes are around human relationships, particularly exploring love, sex, friendship and marriage. Gloria enjoys sexual freedom, hanging out in speakeasies, matching the men she meets drink for drink and yet she also has a great platonic friendship with Eddie “one of those plain Californians”, with whom we see her at her most vulnerable. O’Hara’s portrait of her seems honest, yet sympathetic. He seems to have a great understanding of, and respect for women which is expressed in the dialogue of his characters and makes me think that he must have had a great many close female friends.

feels modern, but perhaps this is because in the early 1930’s, modernity was indeed clashing with the conservative elements in society.

A newspaper imaged pinched from the Starr Faithfull blog

One of the real strengths of this book is the way that O’Hara represents time and place. He really makes the reader feel the atmosphere, by using specific references whether it be the kind of cocktails that the characters drink, descriptions of the clothing that college-girls wear or of the “Yale boys”, “Mr. Average Man” or by refuting the idea that there can be any real “symbol of modern youth” as imagined by F. Scott Fitzgerald. O’Hara presents society in all its shades of grey. I also loved the way that O’Hara showed how the depression had only really begun to touch the upper echelons of society but gave practical examples of how it was effecting the professional classes such as increased rents. While the depression wasn’t central to the book it did add to the feeling that many people’s lives were ready to spiral out of their normal paths.

While many of the characters in the book are vivid, at times there were just too many of them for me! By the end of the book I was quite confused by who some of the people that meandered in and out of the plot. For me, this is where BUtterfield 8 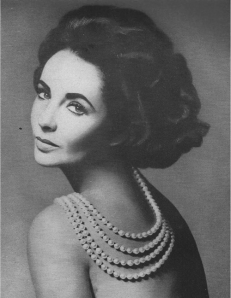 The gorgeous Elizabeth Taylor who played Starr Faithfull in the film of Butterfield 8, photographed by Richard Avedon as seen in Harper’s Bazaar, September 1960

Perhaps this is because O’Hara is trying to represent so many different aspects of society, but it does make for quite a confusing read. Having said that I think if I was to read it again in the future I would get much more from it and be able to piece the relationships together more easily. Again, this is why this book is fantastic for discussion as when I started to talk about it at my book-group I realised that I had actually absorbed a great amount of detail and though I couldn’t always remember who had said certain things, particular points made a strong impression on me.

Knowing now, what happens at the end of the book, I wonder if I would notice different characters much more, and yet I’m glad that I didn’t know the plot before because there is some excellent shock value in how the book culminates. BUtterfield 8

is a difficult book to score. It’s not actually difficult to read, but at times it was frustrating because there were so many strands to it. However, I do think it should be recognised as a true classic because of its originality, the impressive way in which O’Hara presents human relationships, his sympathetic and revealing characterisation of Gloria, and because it is really thought provoking. I actually scored it a 7 (3.5) at my book group, but I’ve made it up to 4/5 because the more I think about it the more I’m impressed by O’Hara’s skill as a writer and the vivid impression of this era that I’m left with. A warning though, BUtterfield 8

isn’t a long book but don’t try to read it in a rush and I would even say it’s worth keeping a notebook handy to remember the different characters and how they interlink. Thanks to Claire of Paperback Reader for the choice!

Interesting links (for if you don’t mind plot spoilers!)