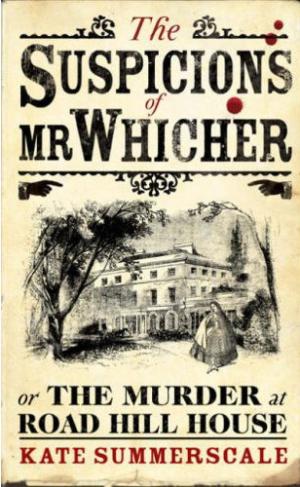 The Suspicions of Mr. Whicher

(Kate Summerscale) is a book that I’ve been wanting to read for a while, so I was pleased as punch when I picked up a second-hand copy for 40p.

The book revolves around a real-life murder committed in the late 19th century. When the youngest son of the prosperous Kent family is found to be the victim of a horrifying murder, Jack Whicher the most celebrated detective of his time is called in to investigate.

The first thing that I noticed was that the style of the book wasn’t quite what I expected. As with The Other Hand, I felt that the blurb and quotes on the jacket were misleading. With comments like “A terrific read in the Wilkie Collins tradition”, and “it is the original Victorian whodunnit”, I was expecting it to be a fictionalised version of a true story, rather than what it is – a quite detailed and well-researched account, pieced together from primary sources. I found this to be an effective technique – as you feel confident you are reading something authentic and the author’s voice has authority, however I think some people might be disappointed by the fact that it is not a straight-forward detective story.

Summerscale introduces the reader to all sorts of interesting snippets of information throughout the book. I was interested to discover through a footnote that the phrase “the curious incident of the dog in the night-time” comes from to a Sherlock Holmes short story, and that the word ‘clue’ is derived from ‘clew’ – a ball of thread – which refers to the yarn that Theseus used to find his way out of the Labyrinth.  You learn something new every day!

I also enjoyed the way that Summerscale uses all the sources available to draw out each character, from newspaper articles to photographs and the detectives own reports. Towards the end of the book, I really felt as if I had a good sense of certain characters, particularly Constance, and William Saville-Kent. The author uses contemporary writing to put events into context and to show the impact that the crime had on the psyche of Victorian Britain. I was amazed to find out just how notorious the case was and to read about the way that authors like Wilkie Collins were influenced by it.

A portrait of detective Jack Whicher

There were times that I felt there was a little too much detail, and about the middle of the book I became slightly bogged down with facts. However, I quickly got past this there are some elegant prosaic flourishes which Summerscale uses to embellish the facts. For example in the following passage where she draws a subtle parallel between the undeveloped crops and the child that was never able to bloom.

“The haystacks had not yet dried, and most were spoiled. The fields of corn and wheat, not having had time to ripen in the sun, were still green.”

I found The Suspicions of Mr. Whicher

fascinating. I wouldn’t say that it’s one of my favourite books of all time. I think that this is because I tend to steer away from factual writing in general, however I was very impressed with Summerscale’s ability to interweave the facts with the storyline and keep me hooked. It also made me want to read all the Victorian Sensation fiction I’ve got on my shelves!

Have you read The Suspicions of Mr. Whicher

? What do you think fascinates people about this period of history?