, is a book that I have wanted to read since I stumbled upon The Victorian Chaise Longue in the library and fell in love with Marghanita Laski’s straightforward but eloquent and slightly haunting writing style.

Other blogger’s reviews also convinced me that this was a must-read for me, so imagine my joy when my boyfriend bought me the Persephone Classics edition for my birthday!

, is the story of a Englishman named Hilary Wainwright, who has lost his wife and child during the occupation of France in the Second World War. Before being taken away by the Nazis, his wife Lisa managed to smuggle their child away to apparent safety, but the little boy was never found. Hilary, now living in England goes back to France to a small town known only by the initial letter ‘A’ after a stranger named Pierre knocks on his door and tells him that he may have found the lost child.

is much more than the story of a man’s search for his child; it is also a journey of self-discovery, a tale of life-changing loss and a desperate portrait of post war France. Laski cleverly uses Hilary’s naïve surprise at the extent to which Paris has been devastated and to highlight how terribly Europe had been affected by the Nazi occupation. Hilary is appalled at how different the France he now sees is, to that which he holiday in as a young man. He also notices with a kind of horror how such a civilised society has become corrupt – where people with money can get steak and fried potatoes from black market vendors, but orphans are denied foods as basic as milk and eggs.

Hilary however chooses to enjoy black market pleasures in spite of internal conflict. This is just one of the many examples of his childlike character. Almost from the outset, it is made clear that the book’s title has a dual meaning. It seems that Hilary himself is aware of this. In one passage, he momentarily mistakes a comment by Pierre as being about himself, rather than his lost son.

Hilary slowly realised that the sympathy was not for himself but for the child.”

Hilary is really quite pathetic at times, which at first, along with his tendency towards intellectual snobbery made me dislike him immensely. This utter feebleness is always present and yet the sad thing is that he is quite aware of it.

“Hilary whispered stupidly, ‘I don’t want anyone to be sorry for me,’ and knew for an instant that he did, that he wanted that more than anything in the world.”

It is Laski’s clever storytelling however, which gently creates an understanding between the reader and Hilary as a man who – devastated, by the loss of his wife, who he was passionately in love with – feels he no longer has a ‘capacity for happiness’. There is also evidently some history with his mother, whom he seems to feel cut off from emotionally. This theme is renewed time and time again throughout the book, once when he feels envy towards Monsieur Mercatel – a teacher at the orphanage – whose mother is kind and maternal, and also when, reading Dombey and Son he is moved by one particular passage where ‘Mamma’ is nursing her dying child.

The development of the relationship between Hilary and the little boy – Jean – is quite painful to read. Hilary’s thoughts and emotions fluctuate so much that the reader is left constantly wondering what the outcome of their meeting will be. Is the little boy his own flesh and blood? Can a man who is lost himself, take responsibility for a frail little boy? Will Hilary be honest with himself or submit to cowardice?

Laski uses her words sparingly but in a way that I found deeply affecting – particularly in this sentence where she creates a vision of little, frail Jean overwhelmed by the excitement of the funfair.

is moving, without being overly sentimental. It conveys the sombre mood of post-war France without making the reader feel as if they are being lectured. It forces the reader to go through a unique journey of understanding with an emotionally frail man, and does it so subtly that you don’t notice until you turn the last page. Little Boy Lost is a poignant and beautiful piece of writing.

Can you think of any characters that you’ve read that you disliked at first and then came to understand?

I think that I’m quickly becoming a devotee of Persephone Books. I think it’s a bit like a boutique, in the way that lovely gems of stories seem to be picked and gathered together so that you can try something a bit different but still be confident that the time you spend reading them won’t be wasted. 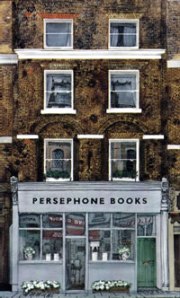 Although I used to work near to the Lambs Conduit Persephone shop, I only ever once wandered in by chance and at the time just saw lots of grey books (albeit very pretty ones) by authors I’d never heard of, and wandered out again. Much later, after reading glowing reviews of a number of Persephone publications I picked up a copy of The Shuttle from the library. Delighted with that I started looking out for the elegant grey spines whenever I pop in to borrow books and my second Persephone, The Victorian Chaise-Longue did not disappoint.

The Victorian Chaise-Longue came out in 1953 and was written by Marhanita Laski the daughter of the socialist thinker Harold Laski, and better known for being a journalist. The plot centres around a young married woman (Melanie) who, after giving birth and recovering from tuberculosis moves to recuperate on an antique chaise-longue and finds herself trapped inside the body of a young woman (Milly) 90 years previous. The normally pampered Melanie, frightened out of her wits, struggles to understand the situation and new identity.

The Victorian Chaise-longue is less than 100 pages which I think was just right. Long enough to develop the character of Melanie and short enough to hold the suspense. I suppose you would categorise the book as a horror story – a very unusual one. I did think it had the feel of Rosemary’s Baby, with the element of the vulnerable young mother and it’s definitely an unsettling book.

I really enjoyed reading the character of Melanie. It seemed that Laski was making a comment about the way in which women can have an external ‘face’ with men which seems suppliant while actually being quite conscious and active in their behaviour.

“‘But I like you silly,’ said Guy, and so he does, thought Dr.Gregory, watching them. But Melanie isn’t the fool he thinks her, not by a long chalk, she’s simply the purely feminine creature who makes herself into anything her man wants her to be.”

I also liked the fact that Melanie was a vibrant and passionate character, much to the annoyance of her doctor:

“As he had expected, by the time he had finished Melanie was sitting bolt upright in bed, suffused with excitement. He sighed theatrically, and instantly she shot down again. Why, in heaven’s name, can’t she do things gently, said the doctor to himself.”

What I think is good about Laski’s storytelling is that it is a subtle. She sows the seed of an idea in the reader’s mind, but leaves you to think about what might have happened without exactly telling you. For example, throughout the story different characters allude to something that Milly has done which is sinful, then a confrontation with another character gives clues to what has happened. I found this element of obscurity worked really well, and I didn’t find it frustrating as I did when I read Henry James’ Turn of the Screw.

I really felt that I’d been treated to an original story in The Victorian Chaise-longue and one that was elegantly told. It’s not currently in print, unfortunately but if you like off-beat slightly unsettling stories like me I would definitely recommend you keep your eyes peeled for a second-hand copy.

What suspenseful stories have you read lately that you enjoyed?

Posted in Books at Length, Marghanita Laski, Reviews by Author, Short and sweet