A little while ago I did this post of mini reviews which I found rather a good way of catching up with myself. Sometimes a girl is rushing around so much she realises she’s read lots of books that she hasn’t gotten around to reviewing yet!

I don’t know about you but I find it’s quite therapeutic jotting down thoughts in shorthand sometimes. Here are those virtual post-it’s again…

The Hare with Amber Eyes

Synopsis: 264 wood and ivory carvings, none of them larger than a matchbox: potter Edmund de Waal was entranced when he first encountered the collection in the Tokyo apartment of his great uncle Iggie. Later, when Edmund inherited the ‘netsuke’, they unlocked a story far larger than he could ever have imagined. 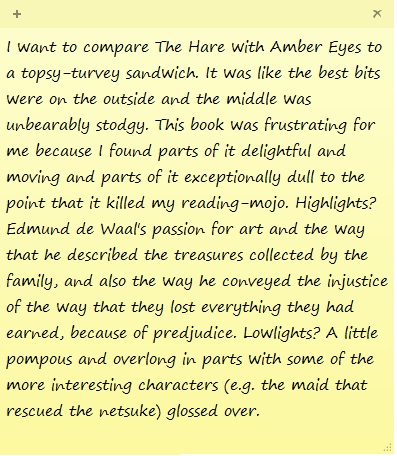 Sebastian and Oskar have been friends since their days studying physics at university, when both were considered future Nobel Prize candidates. But after graduation, their lives took very different paths; while Oskar holds a prestigious research post in Geneva, Sebastain worries that he hasn’t lived up to his intellectual promise, having chosen marriage and fatherhood as an exit strategy. A few days after a particularly heated argument between the two men, Sebastian leaves his son sleeping in the back seat while he goes into a service station. When he returns, the car has disappeared without trace. His phone rings and a voice informs him that in order to get his son back he must kill a man. As Sebastian’s life unravels, the only person he can safely reach out to is Oskar… 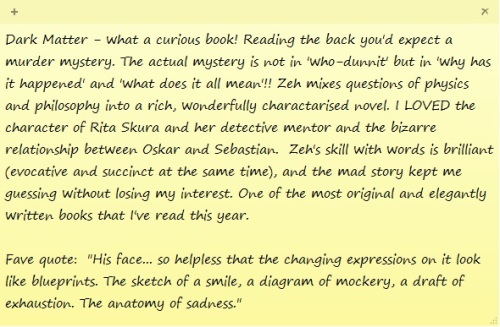 In a sublime story cycle, Kazuo Ishiguro explores ideas of love, music and the passing of time. From the piazzas of Italy to the Malvern Hills, a London flat to the ‘hush-hush floor’ of an exclusive Hollywood hotel, the characters we encounter range from young dreamers to cafe musicians to faded stars, all of them at some moment of reckoning. Gentle, intimate and witty, this quintet is marked by a haunting theme: the struggle to keep alive a sense of life’s romance, even as one gets older, relationships flounder and youthful hopes recede. 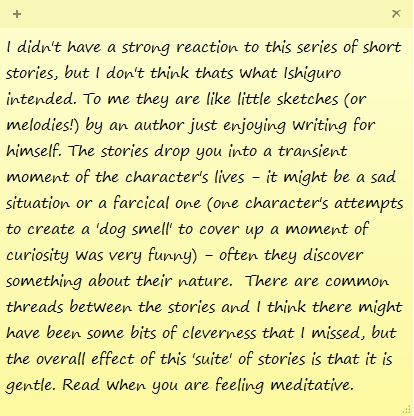 *dusting off hands* Well that’s my little wrap up for the week!

Have you read any of these books. Did you find The Hare with the Amber Eyes what you expected? Have you been lulled by Ishiguro’s short stories or baffled by Juli Zeh’s physics-themed murder mystery?