Through the Wall, by Ludmilla Petrushevskya

Wow – what a spooky and unexpected little collection this is! Possibly, sandwiching my sleeping time with reading Ludmilla Petrushevskaya’s Through the Wall was a little ill-considered as I had some slightly odd dreams last night. 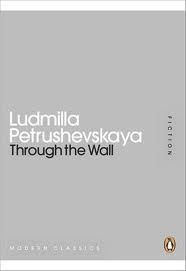 I had never heard of the author, although Petrushevskaya is considered to be one of Russia’s greatest living writers and was so controversial that for decades, her writing was banned in the Soviet Union. Reading stories like this make me grateful for whoever decided to translate them and I am curious to read the disturbingly entitled There Once Lived a Woman Who Tried to Kill Her Neighbour’s Baby which is a collection of nineteen short stories.

I’m tempted to liken Petrushevskya’s stories to those of Angela Carter, because they are dark fairy tales, reminiscent of the style of those in The Bloody Chamber. However, the tales in Through the Wall

feel much more of this world – albeit this world, seen through a distorted glass.

The Cabbage Patch Mother for example is the tale of a woman who has a tiny child named Dewdrop, who never grows. She is told to set her aside and forget her. Later she discovers that Dewdrop, who she placed amongst the leaves of a cabbage has become a full-size, mewling, clumsy real-life baby. This was the story I found most heart-breaking, as it is evidently an allegory for the experience of a woman who has undergone an abortion in the past and can’t forget the baby she might have had.

Marilena’s secret is the story of a woman who is “so fat she couldn’t fit in a taxi, and when going into the subway took up the whole width of the escalator.” It turns out that Marilena is in fact two normal sized women, turned into one by a wizard. She becomes rich and famous for her unusual stature but begins to lose her real inner-selves as she is encouraged to become a poster girl for her husband’s dieting clinic. A tragi-comic tale where the manipulative husband eventually gets his come-uppance.

These are my favourite two of the five fantastic stories in this collection. The stories sound barmy, and yes there is a heavy dose of the surreal, but Petrushevskaya’s tales at their heart are real human experiences of grief, love and loss. They are dark and melancholy stories but each has a resolution and tells of human resilience.

By telling each story as a fairy-tale Pertrushevskaya somehow amplifies the impact of each situation. Isn’t it true that sometimes the most difficult experiences in life feel quite surreal?

What stories have you read that surprised you lately?

20 responses to “Through the Wall, by Ludmilla Petrushevskya”