Tag Archives: The Girl Who Played With Fire

and The Girl Who Kicked the Hornets’ Nest

. I’ve squeezed them into one, because I think of the last two Millennium series books like a single story with an interval in between.  If you haven’t read the first book you might think that it’s not worth reading this review, but read on and you may be convinced to read all three!

I read The Girl with the Dragon Tattoo

last year and really enjoyed it. While it is not a perfect novel for everyone, it has wide appeal, is a brilliant thriller, and is very well written one with particularly engaging characters. (See more of what I thought of the first one here.) It was the characters again that stood out for me in the final two books of the series which are quite different from the first in that the plot is almost exclusively focussed on the background of Lisbeth Salander, who is the tattooed anti-hero(ine) who we meet in the first book.

The Girl Who Played with Fire 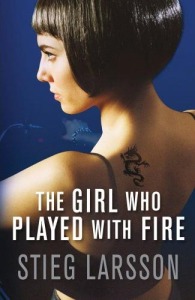 Book II picks up a couple of years after the furore from the Wennerstrom Affair has died down.While Mikael Blomkvist is in Sweden still working at Millennium magazine, Lisbeth Salander has been travelling – escaping it seems from past events. On her return to Stockholm, she becomes mixed up in an investigation which two employees of Millennium Magazine, Dag and Mia are doing for a book on sex-trafficking. When the couple are murdered, Lisbeth goes on the run, suspected of the crime, and is portrayed in the papers as a ‘psychotic lesbian S&M satanist’.  As the story develops, a much deeper and more complex situation is revealed which is intimately connected with Lisbeth’s own personal history.

I had high expectations of this book as I had heard lots of comments that it was the best book of the series. It didn’t disappoint. Ever since the first book I’d been wanting to know more about Lisbeth and also wondering if her guardian Nils Bjurman would resurface, which he did along with a whole other set of new bile-inducing characters. Larsson creates a fascinating history for Salander which is revealed throughout the book, and helps the reader to make sense of her as a character. this is done effortlessly as part of the plot in which current events are a direct consequence of what has come before.

The Girl Who Played with Fire

, had some brilliant plot twists and somehow managed to walk the line between having a selection of bizarre characters and making them seem almost realistic. In this book I found I could relate to Lisbeth much more. As a character she demands a sort of odd respect rather than being exactly likeable, and although I found I could empathise with her, I never felt that I was being manipulated into feeling sorry for her. She is portrayed as both a product of her background and also culpable for her own mistakes.

which makes for a taught and suspensful read right the way through.

The Girl that Kicked The Hornet’s Nest

Book III, follows on almost directly from where the previous book leaves off. Lisbeth is in hospital following recent events and yet again finds herself painted as a criminal with a long list of charges for which she will later be taken to court for. The story – a whopping 700-plus pages, mostly accounts for the time leading up to the trial in which Larsson answers the question – how on earth is she going to get out of this mess?! Lisbeth is the key to uncovering a scandal which is so secret that she finds herself with powerful enemies who are prepared to use any means necessary to keep her quiet.

Oddly enough, I liked The Girl Who Kicked the Hornets’ Nest

even more than it’s predecessor. Most of the action takes place without Lisbeth as she is laid up in a secure wing of a hospital, but this is just as interesting. She becomes a sort of central figure, almost a totem. One group of characters (Mikael, Armansky) are investigating the past and fighting to clear her name, and another powerful, covert group of people are doing anything they can to discredit and harm her. Unusually for Lisbeth, she finds she has to rely on others to help her.

The Girl Who Kicked the Hornets’ Nes

nicely finished up the trilogy for me. There is a strong moral theme to the series around the idea of consequence. The message seems to be that ‘the truth will out’, which may not always be the case in reality, but on a very fundamental level does speak to the idealist in me. Plus, it is delivered in such a violent and messy way that the sentiment wasn’t cloying or sweet.

The thing that makes the Millenium Trilogy both appealing to me and at some points a little bit of a conundrum is the depiction of strong women characters. At the end of The Girl Who Kicked the Hornets’ Nest

, Blomkvist in reference to Lisbeth’s journey sums up neatly:

“When it comes down to it, this story is not primarily about spies and secret government agencies; it’s about violence against women, and the men who enable it.”

Larsson is quite ruthless in the way that he highlights the prevalence of misogyny in society through sex trafficking, stalking and on a common day to day level of women experiencing hatred in an office environment. He does this using an array of strong female characters that challenge typical female role models – notably Lisbeth herself – whose sexuality is ambiguous, is introverted yet has superior intelligence and is a technology geek. There is also Officer Figuerola – a spy of amazonian proportions, and Erica Berger – a tough career woman with an open marriage – amongst others. Larsson seems to be looking at the idea of femininity through a prism.

I had mixed feelings about the women characters. My gut tells me they are a little bit unbelievable – too perfect perhaps in their complexity and toughness. However, I also loved how tough, interesting and different they were. Larsson obviously had a healthy respect for women.

I so enjoyed the Millennium series and feel a little bereft now that I’ve finished it. I liked the fact that the investigative work is done by a roving reporter instead of the rather hackneyed archetype of a depressed male detective. While some of the female elements are little contrived, I can’t help but love the fact that Larsson cast women the key protagonists. Complex plotting, dark themes and compelling characters made this series really stand out for me. There is a reason why every other person on the tube has a copy of a Larsson book.

Have you read any of Stieg Larsson’s books or been put off by the hype?