Debut authors to look out for in 2012 – Waterstones Eleven

Last year I was invited along to the first Waterstones Eleven. The event is designed to highlight some of the best in debut fiction for the year ahead. Last year’s picks were really very good – at least, they were pretty well predicted because I kept spotting positive reviews of choices and quite a few ended up on shortlists or even won awards (Pigeon English, The Tiger’s Wife, When God Was a Rabbit). I’m a little annoyed at myself that I didn’t get around to reading any of them but I often do feel guilty buying new books when I have such a huge TBR. Perhaps this year I will get a copy of Sophie Hardach’s book The Registrar’s Manual for Detecting Forced Marriages that I enjoyed the extract from so much.

Well this year the line up certainly looks interesting. Admittedly this year I was a little less sociable and instead of stalking new Authors was content to scoff a few canapés and chat to the lovely Reading Matters who came along with me. However, I DID snaffle a copy of the book that contains extracts from all the recommended books so will be posting my thoughts once I have read it. 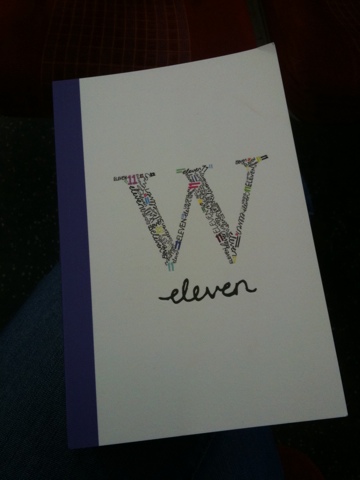 If you can’t wait for my sum-up post you can find out the chosen authors at the Waterstones site and even read extracts for yourself here.

Did you read any of last year’s debut author picks?

Let me just get out my crystal ball and predict a few up and coming authors for 2011. Oh, no someone else did that already…!

On Thursday, Waterstones hosted an event to highlight 11 debut novelists who they think have a good chance of making it big in 2011. I was lucky enough to be invited along, and even had a chance to chat away to a couple of the authors and other lovely literary types. I also snaffled a copy of the the pamphlet with extracts from the novels, which I have been leafing through the last couple of days.

The extracts are varied but the quality of writing is uniformly excellent, however I can’t help but have a bit of a gut-feeling about the writing I’m more naturally drawn to. One extract that stood out to me in particular was from Sophie Hardach’s  The Registrar’s Manual for Detecting Forced Marriages (Simon & Schuster). Just a couple of pages into the story I went from a state of amusement to feeling quite devastated by the tragic consequences of a group of Kurdish refugee’s desperate struggle to reach the shores of Europe. In the bit that I read, Hardach’s writing was engaging and moving and I really felt as if I wanted to know what would happen in the rest of the story.

Bizarrely enough, I quite enjoyed a piece from Shehan Karunatilaka’s Chinaman (Jonathan Cape) which is the first-person narrative of a man living on borrowed time because of alcohol abuse. He has decided to write “a halfway decent documentary on Sri Lankan cricket” before he dies. I have absolutely no interest in cricket or most sport for that matter, however I found the few pages that I read entertaining and really quite poignant. Quite honestly I’m not sure that I would ever read the whole book because of the sport-related subject matter but I was pleasantly surprised by Karunatilaka’s writing style.

Pigeon English, by Stephen Kelman (Bloomsbury) looks to be another dark bit of fiction. It opens with two boys observing a dead body and casually wondering whether they should nick his nearly-new Nikes – “He don’t need ’em no more”. The style is gritty and the voices authentic.

Slightly more cheerful perhaps is When God Was a Rabbit (Headline) which opens with a conversation between a precocious child and his parent about just how far God’s love extends (Murderers? Robbers? Poo…?). The extract suggests a more serious discussion underlying the humour. I suspect that some former acting in TV’s Holby City will help to boost writer Sarah Winman’s profile.

The full list of authors and extracts from their novels can be found here if you are interested. I wonder which of the books on this list will do well this year? The support of such a big bookseller should definitely be a bonus for these up-coming authors!

I’ll definitely be looking to see if I can spot them out on the shelves in the coming months and whatever happens, I wish them well.