A Grief Observed, by C.S. Lewis

Does it seem morbid to choose to read a book about grief? I spotted this slim volume – A Grief Observed

– on the library returns shelf and was drawn to the title which stood out as unusual. 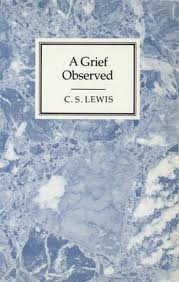 I like the element of chance involved in picking up a book recently selected by someone else for reasons known only to them. I hope that the person who borrowed it previously read it like me, out of curiosity rather than personal grief. Having only read Lewis’s children’s books I felt it might be interesting to read outside of my typical reading scope, but with a familiar voice.

, is an almost scientific title. It suggests abstraction as if the author is conducting analysis of another person’s state of mind. However this book is intensely personal. It reads like a diary and at the same time, a conversation. The reader comes to feel as if they are a true confident, trusted with Lewis’s most personal moments as he goes through the process of grief after the death of his wife, who is referred only as “H”.

At times his writing feels like a eulogy and at others a simple therapeutic act. At the beginning of the book, Lewis is working through his immediate emotional response, frightened that he might forget “H”, or worse still that he will create a false memory of her – a sort of idol or lifeless doll. He criticises himself for being self-pitying, angrily questions his idea of God and rails against the seemingly glib advice and words given by others trying to offer their awkward yet well-meaning words to a bereaved friend.

Of course, this is a sad book to read, but also so beautifully and eloquently written. The raw human feeling expressed by Lewis is moving. It is also frightening – who amongst us, as we become more aware of our own mortality and those around us does not occasionally think how terrible it would be to lose someone we love? In an odd way, I believe that this little book could be comforting at a time of loss, if only because of how openly the author shares his experience.

Fascinating for me (yet also perplexing), was Lewis’s exploration of his feelings towards God. At times he wonders whether he truly exists and in the depth of his anger declares that if he does he must surely be cruel.

“I am more afraid that we are really rats in a trap. Or worse still, rats in a laboratory. Someone said, I believe ‘God always geometrises’. Supposing the truth were ‘God always vivisects’.”

He uses the epithet “The Cosmic Sadist” to God, and the description of Him as a “Vivisectionist” is such a harsh yet vivid image of a person feeling literally pulled apart… experimented upon by some higher detached being.

In the later passages of the book however there is a distinct change in tone. The writing becomes more conciliatory, less passionate with convoluted explanations for why God does exist and isn’t cruel. Although I was unsure of some of Lewis’s logic, I felt relieved that the process of writing his grief seemed to have helped him to move through and beyond his initial pain. Still though, the knowledge that he has that he may be yet surprised by a new fresh sadness, lingers and reminds us of how deeply he loved his wife.

“Sorrow, however, turns out to be not a state but a process. It needs not a map but a history, and if I don’t stop writing that history at some quite arbitrary point, there’s no reason why I should ever stop. There is something now to be chronicled every day. Grief is like a long valley, a winding valley where any bend may reveal a totally new landscape”.

I felt admiration for how the clarity and beauty of his words. Although A Grief Observed

is a sad piece of writing, Lewis’s obvious passion for his wife inspires me and his words make me wonder at how strongly humans can be bound together by love.

What books have you read that really affected you?

This entry was posted in Books at Length, C. S. Lewis, Reviews by Author, Short and sweet and tagged A Grief Observed, C. S. Lewis, Grief, Non-fiction. Bookmark the permalink.