Yesterday I lounged in the garden in the wonderful sunshine, enjoying the luxury of several hours of complete absorption in The Loving Spirit

with several cups of tea (in an appropriate mug)… 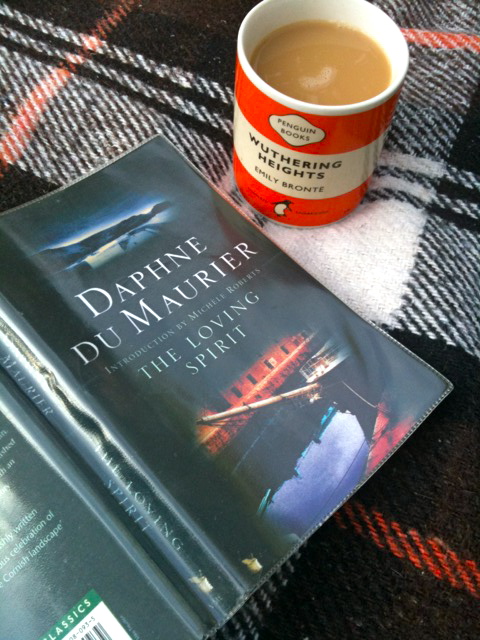 …and the companionship of a little friend. 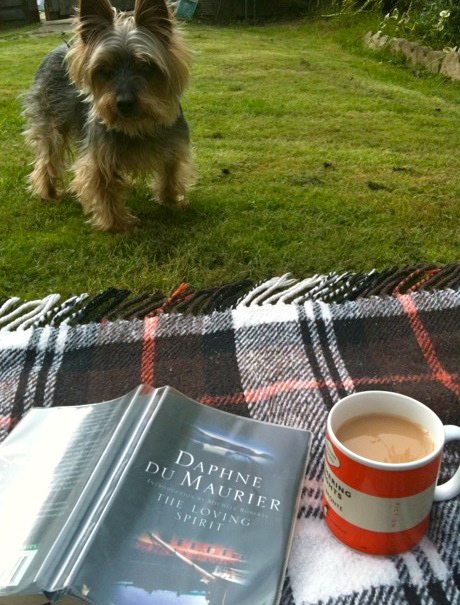 When planning Discovering Daphne month, Savidge Reads felt it was only right and proper that we should start our journey with du Maurier’s first published novel. Although neither of us are new to du Maurier, reading lesser-known or early books by an author that one loves can be quite a voyage of discovery. 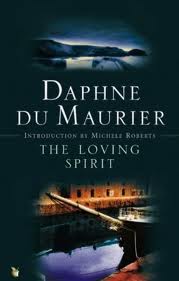 Originally published in 1931 The Loving Spirit takes it’s title from Brontë’s poem Self Interrogation. (Read it in full here)

“Alas – the countless links are strong
That bind us to our clay,
the loving spirit lingers long,
And would not pass away”

The book tracks the lives of the Coombe family over several generations, starting with Janet who in 1830 is a young woman with a passion for adventure and a love of the sea. In the small town of Plyn, she marries her cousin Thomas, a boat builder, and knowing that she will never be able to fulfil her seafaring dreams, settles down to raise a family. When her youngest son, Joseph is born, she passes on her spirit of adventure and somehow Mother and Son are connected by an unbreakable bond which at time seems to defy even the rules of time and space. The reader follows four generations of the Coombe family over a period of a century as they tread their own distinctive paths, while remaining connected by a sort of invisible thread which is the immutable ‘loving spirit’.

The Loving Spirit is certainly not a perfect book. In fact if I read the synopsis I’ve written above, it all sounds a little flowery and improbable. Some of it is improbable, but, du Maurier plays with spiritual themes in her novels with dexterity. Unlike Rebecca, the spirit in this novel is tender, however it is also tempestuous. There are echoes of Wuthering Heights in The Loving Spirit, with the theme of a bond of love that is all-consuming and transcends death, as well as in the stormy atmosphere of the novel. I think that most readers would find Janet’s relationship with Joseph unsettling. There are passages that are quite sensual at times, and Janet, seems not only to see Joseph as her child but also as her soulmate and at times Joseph’s looks and fiery nature make him seem almost like a male mirror-image of his Mother. Pretty dark, no? A fore-runner of things to come in du Maurier’s later novels, certainly.

Having said all that, there is a great innocence to many of the characters. For example Christopher, Joseph’s son is a lovely appealing sort of person, who fundamentally just wants to make his own way and to please his father and his new family. Du Maurier uses dialect to convey feel of the simple, rural life in a way that reminds me a little of Thomas Hardy novels and also makes me think of Lorna Doone (although I’ve never read it!). With the west-country dialects and vividly described natural landscapes, at times I started to worry that she was creating a sort of chocolate-box olde worlde charm, but of course, just when everything is getting  a little too cosy, she throws in a spot of madness, or a villainous character.

I’ve been really impressed in reading  The Loving Spirit and also Mary Anne (which I got a head-start on a couple of months ago), with the skilful way in which du Maurier conveys the passage of time. The book feels epic but by highlighting only the most important moments of the most interesting characters’ lives there is also a concentrated energy about her writing.

Curiously, in the final part of the story the tone of the book changes. Perhaps it is partly because the turn of the century marks a shift into modernity, or perhaps it is to do with the voice of Jennifer. She is the most grounded of the characters in the story, and though I may be reading too much into her writing, I felt that she was the closest that du Maurier really gets to putting a bit of herself into the novel. There are also some quite humorous moments where Jennifer’s partially deaf grandmother keeps mishearing conversations and accusing her of inappropriate behaviour which I felt must surely have been plucked straight from life! I can’t help but think it would have been nice to have some more of these amusing moments earlier in the story though.

In my mind, The Loving Spirit

is Daphne du Maurier striking out boldly as a new writer, trying out her own personal style, inspired as much by the wild Cornish landscape that she adored, as the writing of Emily Brontë who she evidently admired. I really enjoyed the plot, atmosphere and the vibrant characters, and while I didn’t find it as satisfying a read as I have done other books by her, it was truly fascinating to see where Daphne du Maurier started her journey as a writer.

Have you read any debut novels by authors you love after reading their masterpieces? Did they give you a special perspective on the author and their writing?

Find out what Savidge Reads thought of The Loving Spirit here.