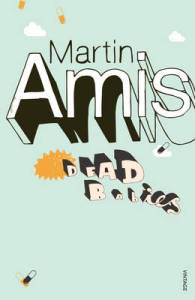 What a title. I kept hiding this book in public especially when small children were around. The story is as lurid and shocking as the title suggests and this is the reason why, while I have rate this book highly I would not recommend it to everyone. You have been warned!

Amis introduces us to a cast of characters, ranging from the sublime to the ridiculous. Actually sublime, is the wrong word. There are some superficially charming characters, but really they are all pretty vile and some are more pathetic than others. Unfortunately-named Keith Whitehead, is the stories’ most physically grim character. Short, fat and squat with digestive maladies that will make you cringe at Amis’ description. Pustular Keith is on the outside, he is actually one of the books more sympathetic characters , particularly when compared with the aggressive and erratic Andy Adorno and Roxanne Smith, a buxom but manipulative and downright nasty American. The least offensive character is probably Giles Coldstream, whose obsession with his teeth is totally awful to the point of being hilarious. There are also three female characters (Celia, Diana and Lucy) who are marginally less appalling but still with their particular vices and possibly less memorable and well-described than the men in the group. Finally, two more Americans – Skip, who I can best describe as a bisexual psychotic hick, and Marvell, a Jewish drug dealer. This delightful party is holed-up together at Appleseed Rectory for a weekend of drug-taking and debauched sex. 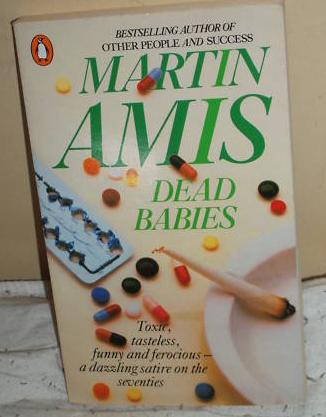 A 1980's Penguin edition. Seems like the most dangerous drugs that the cover photgrapher could find were contraceptives and cod liver oil...!

The story primarily follows the events of the weekend, which are messy to say the least, but intermittently we are also given a snapshot of the background of each character. This gives a valuable insight into the people that they have become. I didn’t feel any more empathy for the characters, but it did fulfill the question of ‘why’ they were all so awful. This approach could have been contrived but I thought it was done seamlessly.

is a difficult read in parts because of its shocking content. Originally published in 1975, it must have been pretty outrageous. I didn’t know the publishing date when I started it and thought it was much more recently written. Apart from some of the language (particularly some wierd racist terms) this is a book that could easily have been written in the 80’s, 90’s or 00’s. You could say that it’s like a ‘posh’ Trainspotting in some parts, and I wouldn’t be surprised if Irvine Welsh had been influenced by Dead Babies

. However it’s also a funny read – Giles, with his terror of losing teeth is consistently comic. Amis cuts his characters’ personalities to shreds with a knife-sharp pen and a generous dose of dark humour.

I read London Fields a few years ago, and while I found it interesting and skilfully written, it is a dense read. Dead Babies

feels like you’re caught up in a fast paced, slightly hellish whirlwind of a novel. Dead Babies

is superbly written. Disgusting passages are hyper-vile, but there are also sentences that are beautiful in the way that they are constructed and timed. Amis uses language in an original and surprising way and I am slightly in awe of his skill with words.

N.B. This was a Riverside Reader’s book group read. I think it’s worth mentioning that this book divided us on ratings. Definitely a ‘Marmite’ book. You can see a summary of the group’s thoughts here.

Have you read Dead Babies or any of Amis’ other books?

This entry was posted in Martin Amis, Reviews by Author and tagged Books from the 1970's, Contemporary Fiction, Dead Babies, Martin Amis. Bookmark the permalink.